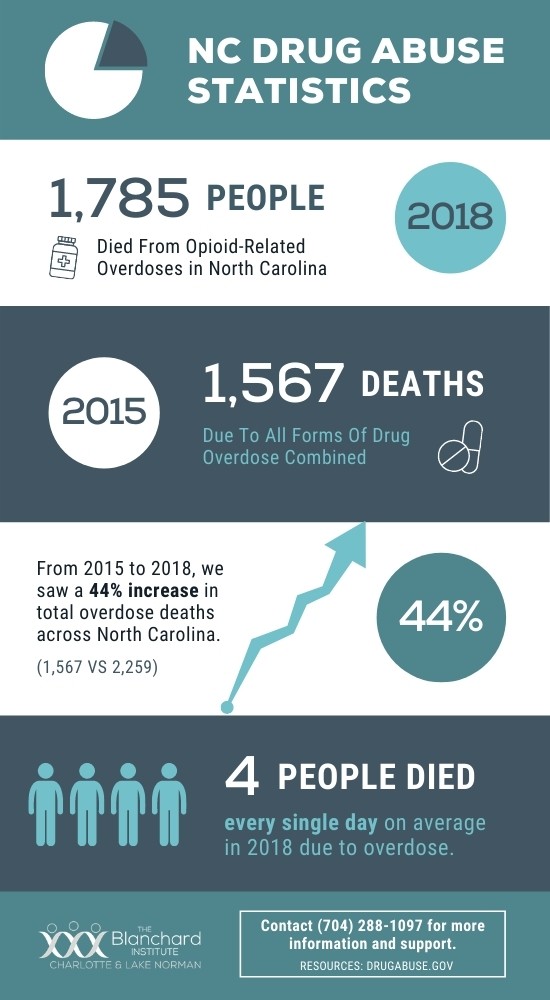 Clearly, these numbers are appalling. In 2018, 2,259 people died from drug overdoses right here in North Carolina. That comes out to almost 6 people every day. And this doesn’t even factor in the thousands and thousands of family members who are forever affected by these drugs.

The numbers are dizzying. It’s difficult to wrap your mind around a tragedy of such massive proportions… and yet one thing is clear–North Carolina has a problem it simply cannot hide.

The Blanchard Institute exists to address these issues directly. We believe in a holistic approach that addresses the mind, body, and spirit. We pay as much attention to any co-occurring mental health disorders as we do to the substance use disorder itself. You and your family have suffered long enough. Please don’t wait another day to reach out to us if you or a loved one is showing the telltale signs of a substance use disorder.

Statistics can never truly tell the story of substance use disorder. The disease is too personal and too close to the user’s and family’s hearts. However, these statistics can show how pervasive the substance abuse problem in North Carolina truly is. Statistics can also show us the absolute necessity of high-quality treatment centers and early intervention.

According to the National Council on Alcoholism and Drug Dependence, here are some of the signs that someone is suffering from a substance use disorder:

If you need help and personal attention, please contact us online right away.

In large part because of the national opioid epidemic, statistics for other drugs often get overlooked. We’ll examine some of these in the next few sections.

Alcohol abuse might be more socially acceptable than other forms of drug use, but it still has some staggering numbers attached to it:

These numbers don’t account for the massive economic impact that alcohol abuse has on North Carolin, nor do they consider the prevalence of underage drinking.

The impact of other forms of drug abuse in North Carolina:

Again, the national opioid epidemic might be receiving the most attention, but these numbers demonstrate the impact of other drugs on the people of North Carolina. 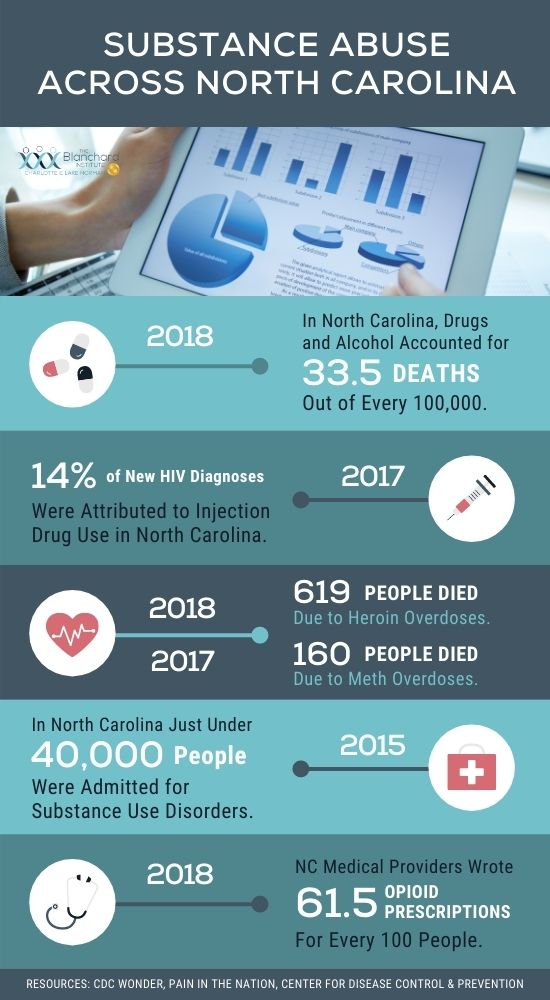 The Economic Effects of Drug Addiction in the U.S.

The economic impact of drug and alcohol abuse cannot be overstated. The numbers you’re about to see might seem abstract in a way, but they’ll become very concrete if you consider the benefits your state would have received if the money lost to addiction had been spent on prevention.

Here are some of the economic numbers associated with drug abuse in North Carolina and across the United States:

Alcohol abuse has a significant negative effect on both personal and public health. It is connected to increases in the incidence of things like violence, suicide, homicide, and risky behavior. In fact, studies have shown that alcohol was involved in 23% of the suicides in North Carolina.

Over 30% of the opioid prescriptions written are abused in one form or another. Many of these subscriptions are subsidized by North Carolina employers and demonstrate the drastic effects that opioid use can have on the state economy. On average, employees who abuse opioid drugs cost employers nearly $20,000 a year in medical expenses, which is almost twice the amount spent on non-abusers.

The Effects of Substance Abuse in the Workplace

The importance of substance abuse education in the workplace cannot be stressed enough. With 70% of people struggling with substance abuse currently holding a fully functioning job, employers must have a plan to address the issue and create a substance-free workplace.

Here are a few statistics associated with substance abuse in the workplace:

Not only does substance abuse result in this enormous loss in profits, but it causes problems with employee morale, productivity, tardiness, overlooking mistakes and even injury.

The Most Commonly Abused Drugs In North Carolina

For a closer view of the North Carolina substance abuse problem, let’s have a look at the five most commonly abused drugs in the state. Taken together, these five substances represent approximately 90% of the causes for treatment admissions in North Carolina:

Marijuana is the most commonly used drug in North Carolina. There are approximately 20,000 marijuana-related arrests a year statewide.

About 8,000 people a year are admitted to drug treatment centers for cocaine use. It is also associated with the highest number of accidental poisoning deaths of all illegal drugs.

Heroin has played a huge part in the opioid epidemic in North Carolina and the rest of the country. Many heroin users first use the drug after becoming addicted to significantly more expensive legal prescription drugs.

Meth is easily obtained all over North Carolina and the state has witnessed a significant rise in the seizement of meth labs. Although less frequent than opioid overdose deaths, the number of deaths associated with meth use has risen sharply in recent years.

The Need For Addiction Treatment in North Carolina

If nothing else, these astonishing numbers demonstrate the great need for addiction treatment in North Carolina. Without medical detox, most drug users are unlikely to stop for fear of agonizing withdrawal symptoms.

A dual-diagnosis center like The Blanchard Institute can help in a variety of other ways as well. Our experienced team works to address the root causes of addiction as well as the substance abuse itself. Don’t let you or a loved one become a part of these statistics. If you or a family member is engaged in substance abuse, please contact us right away.